In principle, I recommend the balancing on the palm! Watch your hand in the push-up position with straight arms. Try to keep your weight only on your fingers … It is possible, but unnecessarily difficult. And now watch the angle between forearm and back of the hand. Usually the possible range is between 90 ° – 270 ° DEG, but keeping a weight on the back of the hand is unnecessarily difficult too.

I have met people who could move their wrist until the touch with the forearm on both sides. In the partner balance, only the range of 100 ° – 170 ° makes sense. Let’s say, 100 ° is very flat and 170 ° is very steep. The ideal angle is between 120 ° – 150 °, depending on the individual strengths of Base and Flyer. The flatter the wrist is held, the greater this strains on the wrist. Getting the angle very steeply relieves the strain on the wrist, but shifts the problem to the ball of the thumb because the root-cause has not been removed: the balancing with the fingers! To understand this, I would like to focus your attention on the palm of your hand … 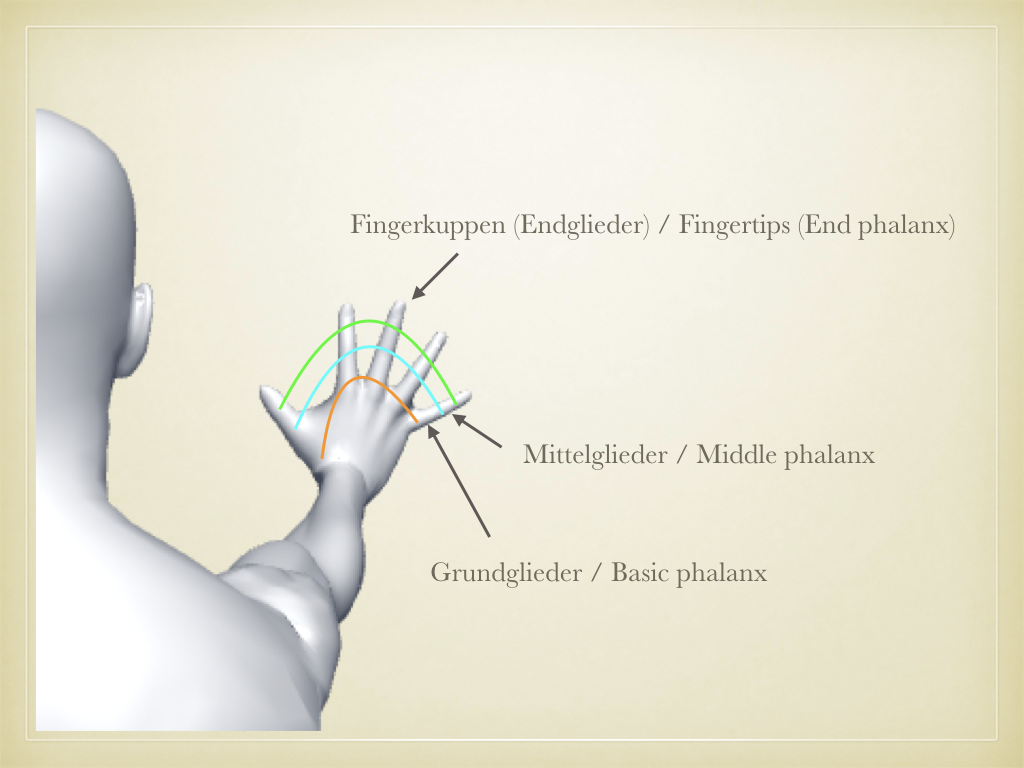 If you lay your hand flat on the table and spread all your fingers, then ​​your palm has the maximum size. Between hand and table there is no hollow space. Each finger has 3 phalanxes:

Now try to move your fingers without the palm lifting off the table … It is possible to bend and lift the fingertips and the middle phalanx. It is still possible to lift the basic phalanx … But as soon as you try to bend any basic phalanx, the palm lifts off the table → it creates a cavity between the palm and the table. Now only the carpal and fingertips have contact with the table and the angle in the wrist becomes flatter. Now try to shift your weight to this hand. The fingers give way under pressure, which shifts the balance in the direction of the wrist. This balance is at the expense of the partner who gets a too much pressure in his fingers and thus also becomes flatter.

The consequence of this is to regard the basic phalanxes as an integral part of the palm and to use them as a single platform.

And now direct your attention to the thumb … it also has 3 phalanxes! The metacarpal bone of the thumb (in my understanding actually its basic phalanx!) allows the counter position of the thumb to the other fingers. Which, by the way, is oddly enough a little-known feature that sets us apart from the monkey. Brings the thumb and the little finger together, watching his basic phalanx. The palm gets minimal! The thumb is thus the most important finger while balancing. If you grip with your thumb, this is a natural reflex, but this significantly worsens the balancing. When anyone grabs the Hand2Hand with his thumb, the pressure shifts into the ball of the thumb, which in the long run can be very painful. The diagnosis is very simple, if the ball of the thumb is framed by a red welts, then you balance on it!

Hopefully you understand now the initial problem … the steeper the palm, the less pressure becomes on your wrist. But as soon as you work with the base phalanxes, your palm becomes small and you slip all the more into the ball of the thumb. Anyone still do not understand? So try to get steeper with the palm while using the shake-hand grip (see below), without using your thumbs for hooking. If you now correct with the base phalanxes, you slip out of the partner’s palm. With your thumbs hooked, you will inevitably slip into the balls of your thumbs and also it twists your hands.

In the shakehand grip, the fingers from base and flyer do point in different directions. The balancing is in the palm of the hand, which is ideally at both maximum sized. Showing and / or middle finger are pointing forwards. The partner’s hand has contact with as many basic phalanxes as possible. Fingertips and middle phalanxes grip with tension, but without getting cramped. The line of force runs from the shoulder with the arm extended (long) and from the elbow through the middle of the palm when the arm is bent (short) … 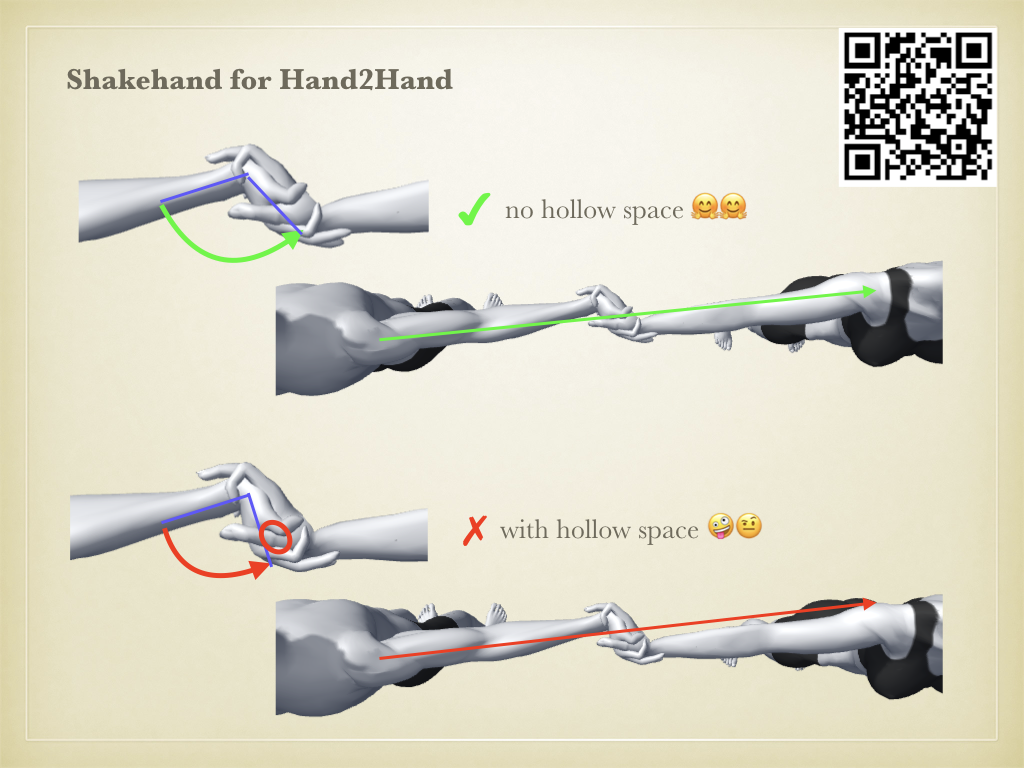 In principle, the ideal range for the wrists of the flyer is between 120° and 170° also in the counter-handstand position. However, the base will only be able to offer an angle of up to 120°. If the flyer uses his hands steeper, he will slip into the bale of the thumb.

A good connection of the palms is given when both palms are maximally large and the suction cup effect when releasing the hands can be heard. Again, the use of the basic phalanx releases the suction cup and has a negative effect on the balance. Mostly, the base in the hands becomes very flat, or balances only on his carpal and thus ultimately on the thumbs bales… 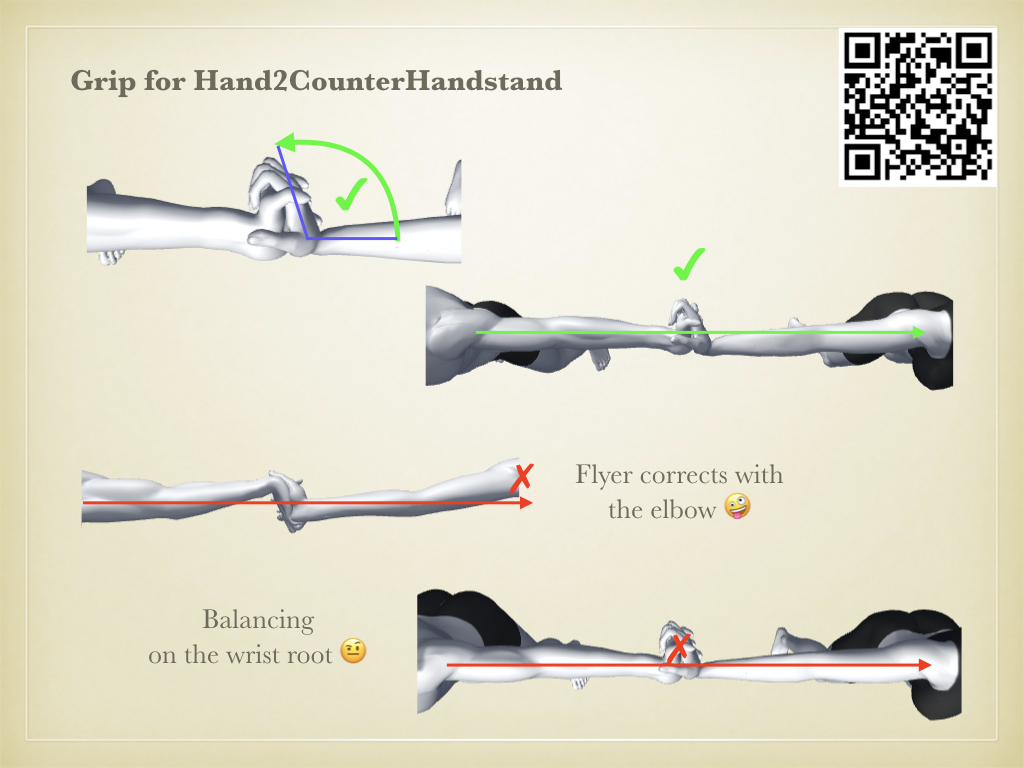 The number of possible grips is almost limitless, but they play a minor role in the balance, as they are either used only for special transitions or not at all. If necessary, I will explain such grip in the context of the trick in more detail.

Finally, I explain a last grip, which may give the beginner very many difficulties …

This grip uses in particular the counter position of the thumb. The palm adapts to the forearm of the partner and the basic phalanx of the thumb, small finger and ring finger generating the necessary holding power. The basic phalanx of index and middle finger remaining uninvolved. The force line goes from the shoulder of the base, through the palm of his hand to the flyer’s shoulder (see picture below).

When this line misses the flyer’s shoulder, it quickly becomes very tiring to hold the grip. One reason may be that one partner is bending his wrist. This creates a cavity between the hand and forearm of the partner, which acts like a lever. Climbers are familiar with this phenomenon: if they bend their wrists during bouldering, the muscles of the fingers become acidified very quickly… 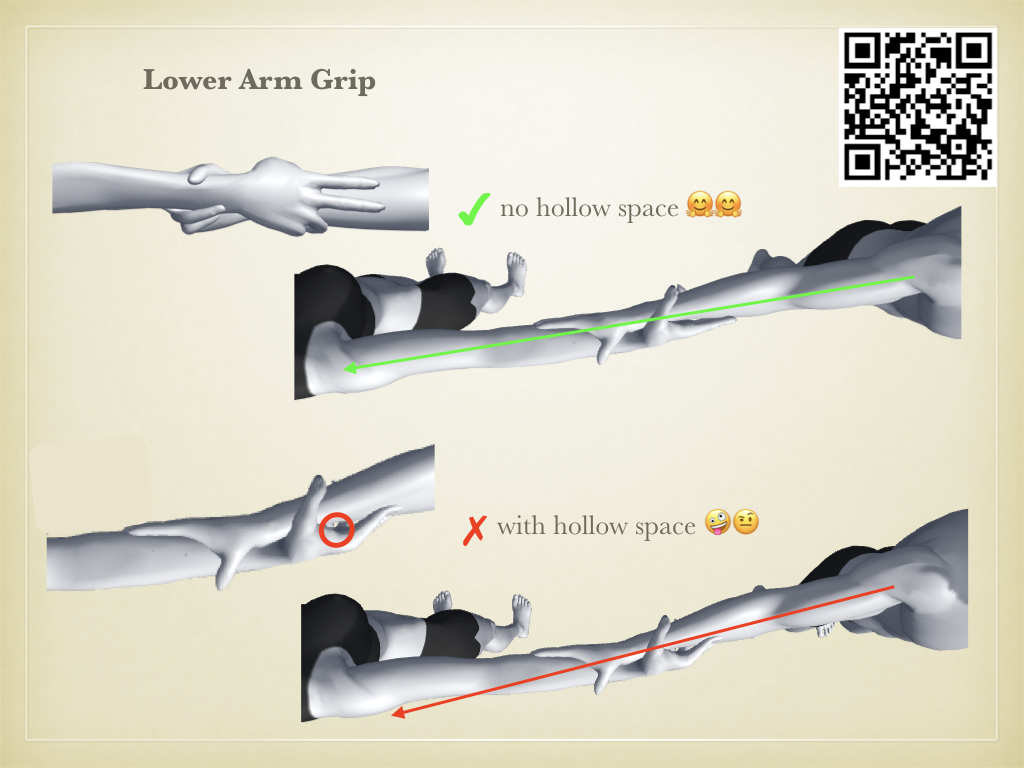