The cause for a Boleo (= slingshot) is the Rebote (= rebound). The step approach will be stopped and there is a weight transfer to the previous foot. The Rebote is danced with a body counter movement (= dissociation) that starts in the shoulder and continues like a wave until the foot. The free foot moves on until the end in the original dance direction, taking off and giving the impression of a whip. 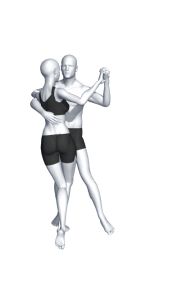 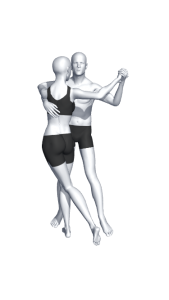 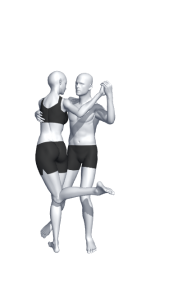 In advance to the Boleo, the Ocho is danced forward or backward. After the forward ocho, the boleo will cross the legs forwards. The angular momentum of the ocho can be strengthened with a pivot. Once the leg has reached the knee2knee position, the Rebote is danced. The more pronounced the previous pivot was, the stronger the dissociation becomes. The flung foot is pulled by the dissociation under the own elbows. Thus a Tanguer@ does not need to give up the boleo at a dance event. Without an initial angular momentum, the rebote creates a line-boleo. At this in fact it is not easy, to keep the free leg under your elbow…

The boleo ends when Tanguer@ downs the free foot to the knee2knee position. Both partners are in their axis and only the music limits the subsequent movements. 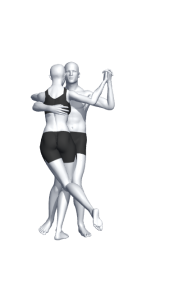 … in the case of an ocho milonguero, the whip is danced largely without dissociation. The Rebote is just a short impulse, which shows the Boleo rather zippy and only in the lower leg. 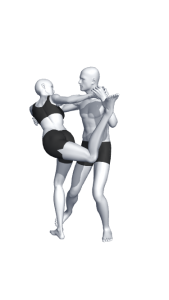 Show dancers, on the other hand, reinforce the whip’s impression by letting the leg fly until above head height by using a fleetingly standing-libra.

With the Boleo can set very beautiful accents. The intensity of the rebote and thus the whip of the Boleo follows the music. In legato he will be very soft and fluent and will spread over several main beats. In staccato it becomes more rhythmic and increasingly repetitive.

Personally, I love to paint the music with my partner’s legs. For this to use the Boleo is excellent. As a man, I avoid the Boleo, because it deducts too much attention from the lady and thus the connection suffers.