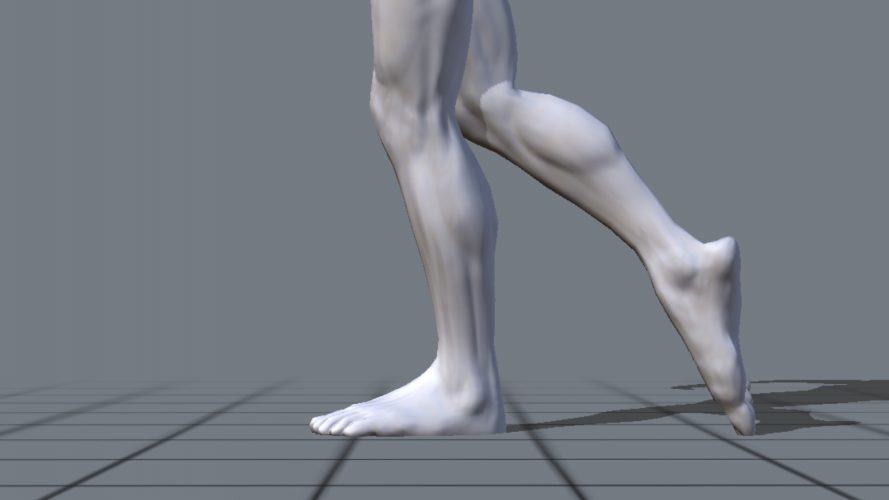 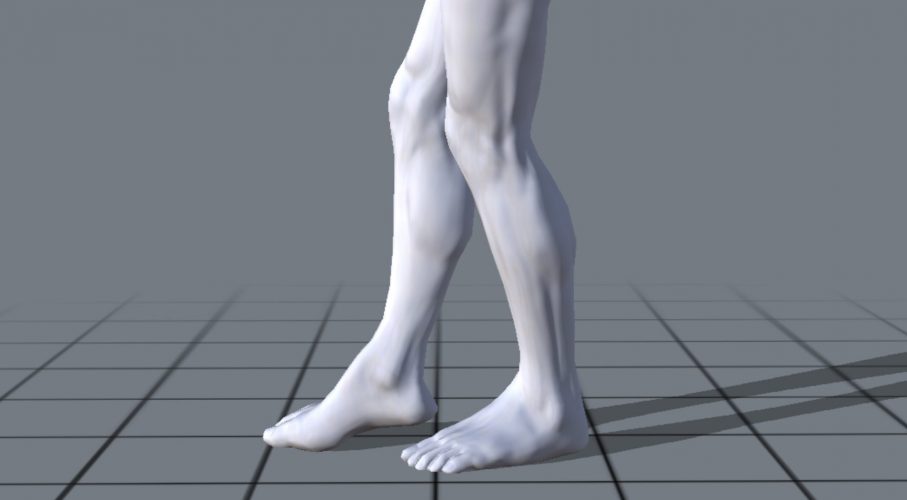 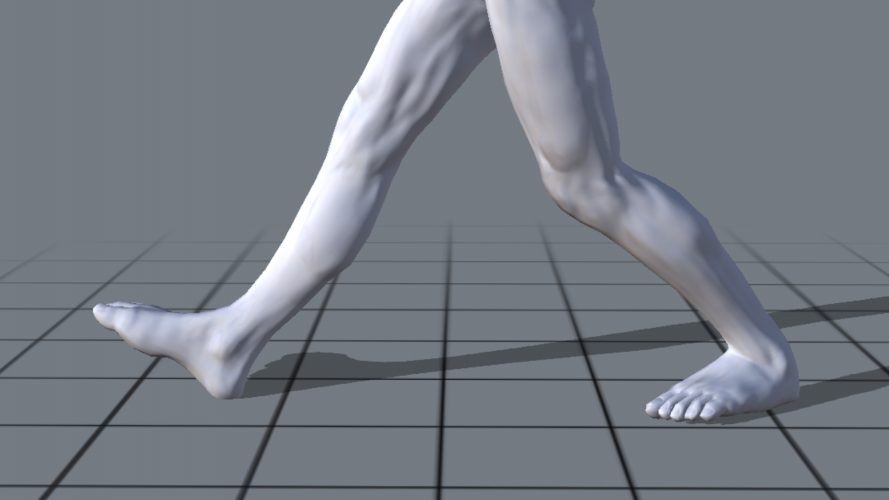 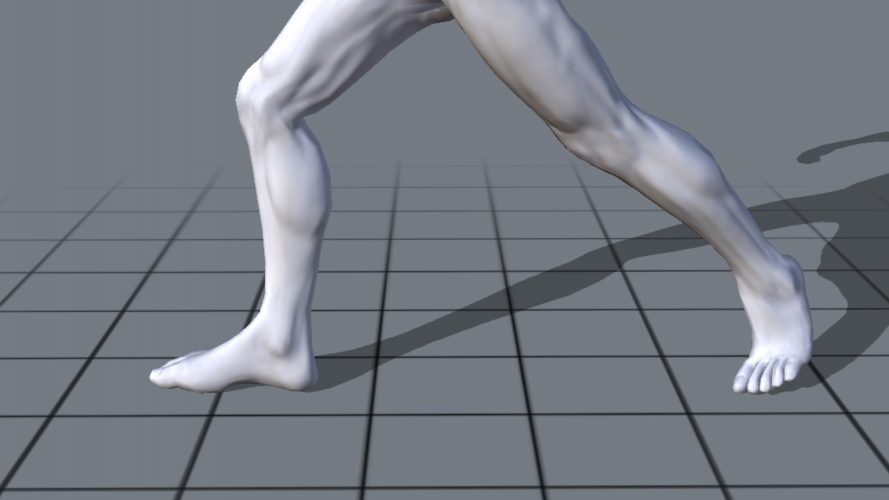 “La Caminata” literally means “mountain hike”. However, a Grande Maestro from Argentina gets glowing eyes while using it and talks about how the tango step is “right” to perform.The hard step approach of the ballroom dancers (with a strong staccato in the footflick*) is not much appreciated in Tango Argentino. The step approach should be rather soft and correspond to the weight transfer of the danced emotion. Since the Tango Argentino does not specify any fixed step patterns, the rhythm is also freely selectable. I see the art of the tango therein is to musically shape the weight transfer and the pause before the next movement impulse. In such breaks, Tanguer@s also like to paint ornaments independent of the partner with their feet. The rhythm and an efficient step approach is always the priority for me, otherwise I perceive the ornaments very quickly as unnecessary flourishes.

Astonishingly, there are many different opinions regarding the foot technique in the forward step. In principle, every movement starts at first out of the stillstand. But even here there are already a variety of philosophies … A Maestro is of the opinion that the outward rotation of the feet with exactly 11.7 degrees is the only natural position of the feet, no matter how awkward the remaining musculoskeletal system must react. Another maestro is of the opinion that only parallel aligned feet are really functional. It seems, no nobody likes inwards rotated feet, even though this definitely do happen in forward-crossed steps …

The biomechanics demands a load on the entire foot while the weight rolls over it. So the directional vector of weight is crucial to the position of the feet and the direction vector depends on the first pulse. Moreover, the outward rotation of the feet is largely determined by the hip position.

La Caminata starts with the first movement impulse, which makes the body lean in the desired direction, in the forward motion so forward. This impulse is generated via the heel of the standing leg.

Self-experiment: It is a common fallacy that the first impulse for the forward movement comes out of the toes. If you do not believe it, go and stand with your face and your tiptoes straight at the wall. And then try to stand on your tiptoes. If you keep your toes on the wall, you will notice that the impulse presses you backwards away from the wall. Now raise your toes and you realize that it pushes you against the wall. Although sprinters start on their toes, but not from a standing position. They are already leaning far forward. Most of the time they even lean on their hands!

Following the impulse, the center of gravity rolls from the heel to the toe, with the hip overtaking the knee. As soon as the knee protrudes over the toe, the free leg touches down. The biomechanics warns: A strain on the knees outside the foot area is not healthy for them! The weight force in the movement, however, does not act vertically, but obliquely from the front. This creates the impression that the knee reaches far beyond the foot area. Imagine a jumping stick that is compressed along its axis and tips over at the same time.

The step approach determines the timing in the music whether the couple is in beat or not. Whether the step approach is done with heel or ball is rather a question of dynamics. If a continuous rolling motion is desired, the heel touches first. If the energy shall be reduced, then the touch down with the bale makes sense, since the weight shift runs from the toes to the heel against the body direction and thus the movement slows down. However, the heel of the standing leg is still on the ground. This position is often referred to as Heel2Heel (picture 1). 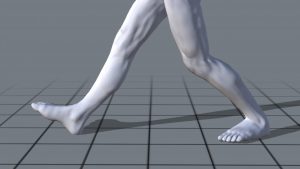 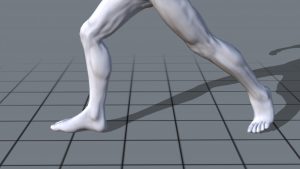 This ensures that the back leg can stretch when leaving (picture 2), creating a long leg line. When the heel of the standing leg takes off too early, t the knee pushes under the hip (= loss of momentum) and it comes to leglines like a Dachshunds. Some Tanguer@s appreciate this soft foot approach and conceal the disadvantages of crooked knees with extra wide leg dresses.

The weight shift meets several requirements … The upper body remains turned to the partner, the common axis does not tilt and the weight remains (during the weight shift) on a plane. As a beginner, I always had the one-dimensional feeling that the woman is in my way and I inevitably step on her feet. As an advanced my perception was more 2 dimensional … right side – right foot … left side – left foot. The dance felt like driving a tank. At some point I could distinguish center of gravity, left and right side of my partner and it arose a 3 dimensional model in which there are inside and outside circles. Accordingly, the clarity of my step approach and the energy of my movement also had changed. Since then, I have always been in search of the soul of the movement … what makes a movement fascinating? I found one answer in the interpretation of the music. What does not suit with the one music acts suddenly sensational on the other.

But even the most beautiful movement has to end someday … As soon as the center of gravity on the front foot has arrived and the knee of the former standing leg loosens, the step ends in an open position of the feet. A particularly aesthetic end position is achieved when this knee comes to rest laterally behind the knee of the new supporting leg. From this open end position can be started in any new direction, without colliding with the knees of the partner. Due to the open position of the feet, it is also possible to initiate a rotation in the own body axis. To a closed position of the feet it comes at the earliest with the next impulse, in the case of a Giro possibly not at all … 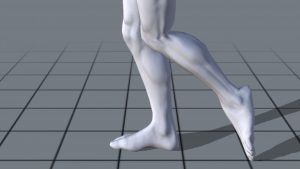 Unfortunately, there are many followers of the “closed-to-closed-dance theory” that I’ve never seen at a world-class pair. The active closing of the foot at the move end disturbs the balance and is often interpreted by the partner as the next impulse. A hounded feeling is the consequence.

The backward movement is as multifaceted as the forward movement. The first impulse of movement arises consequently in the toes of the standing leg. The visible movement starts, however, with the footflick of the free leg (picture 1), which gives the impression of a Fußabstreifens. Only then is the center of gravity rolled from the toes towards the heel. Particular attention to the knee, which should not come in front of the toe when pushing off. Due to the counter-movement of the upper body and hip, the legs open like a pair of scissors, creating a Toe2Toe position (picture 2). Only with the shifting of the weight raises the bale of the standing leg and the foot rolls over the heel (picture 3).

For weight shifting the same applies as in forward motion (see above). In the staccato of music there is a temptation to lower very quickly into the knee of the free leg. This creates a falling motion that must be balanced in the upper body. Lowering into the knee, however, makes sense only on the standing leg. 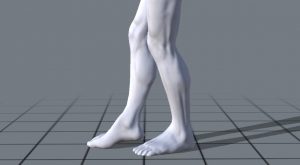 The step ends, as does the forward step, in an open foot position. As soon as the heel of the free leg touches the ground (kissing the floor!), the knee of the previous standing leg slips sideways in front of the new standing leg and is ready for the next impulse. In the case of a subsequent forward movement, the inertia of the foot can lead to close, but should not be generated actively.

Also a frequently discussed direction of movement, as many couples produce a forward movement instead. These are especially couples with wide outwards rotated feet, which in their case certainly makes sense to avoid a swivel movement. Some Tanguer@s love the swivel movement of Charleston, especially in the Milonga. Personally, I find that they blur the timing of the step approach and thus lose the musically clear foot guidance.

The center of gravity while standing can be easily shifted between the legs. This creates the lateral movement impulse automatically by shifting the weight to the standing leg. The unloaded foot of the free leg loosens slightly backwards in order to avoid the knee to collide with the partner’s knee. The standing leg lowers and pushes off to the side. Starting the step is done by a footflick to the side. The limited mobility of the knee limits the move, while the weight shifts sideways from inside edge to inside edge of the feet takes place. This move also ends in an open position, while the knees will be closed without pressure but the feet are not fully closed. The actual closing also takes place here only with the next movement impulse.

Very nice musical effects can be achieved with lateral movements because those allow quick weight changes in the pair (e.g. traspies).

*footflick: Although a popular term in ballroom dancing, I’ve not heard him in tango so far. In principle, a flick is a movement in the unloaded knee, as it constantly occurs in Rock’n’roll. The fast stretch sets a deliberate rhythmic accent just before the actual weight transfer. In ballroom, the footflick is often danced simultaneously with the weight transfer in order either to give more intensity to the staccato of the music (e.g. Latin or ballroom tango) or not to slow down the flow of movement (e.g. slow fox).