The shoulder in the acrobatics extends from the neck to about (depending on the power of the base) to the middle of the upper arms, so room enough for several flyers! And that on both sides of the head. The shoulder is (unlike the hip) a floating joint, which means that it has no firm connection with the trunk skeleton. When the base pulls the shoulder to the neck, there is hardly any room left for one flyer. The most important ability of the base in this position is therefore to raise the upper arm without pulling the shoulder to the ears. At the same time, he has to dodge a bit with his head in order to offer the flyer more space.

In the best case, the feeling arises for the flyer to have a comfortable wing chair under himself. The flyer can additionally be stabilized with forearm, head and hands. When the base for free balancing takes his arms down, he must not move his shoulder. While this he always looks a bit wooden … 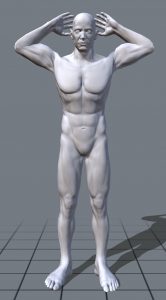 Often the flyer positions himself too close to the neck. This happens especially when the base pulls up its shoulders. But even then if the flyer is actively seeking the stability of the head. Although the balance is primarily generated with the help of the head, however, the base doses the contact and thus the push to the flyer. The position quickly becomes unpleasant when the flyer gives up his line and leans against the head of the base.

Examples:
2-man high: as soon as the flyer actively seeks contact with the head of the base by kneeling, he applies pressure with his shins to the back of the base. The base feels the weight tilting forward and corrects with a forward step. It would be better if the flyer takes the heels deep and holds his center of gravity above his feet with his legs straight. Now, while the flyer holds his heels together, the base can take his head back without dipping between the flyers lower legs. And another tip: please do not twist your feet while standing on the shoulder of the base! The shoulder also turns very red by itself …

Side flyers on the shoulder: if the flyer positions himself too close to the head of the base, this limits the possibilities for subsequent positions. Thus for example, a neck-twister is already over before he actually was starting.

This position is also often used for dynamic tricks, since the energy of the legs can be used optimally here (→ special case throw).