The critic Louis Leroy insulted Claude Monet (photo: Impression – soleil levant, 1872, Musée Marmottan, Paris) as an “Impressionist” and accused him of superficiality. Previously, the artists were referred to because of their painting technique as Intransigeants (“the stubborn”) (excerpt from Wikipedia).

Also acrobats are artists and therefore also creative and stubborn … it is discussed and lamented whether and how partner acrobatics should work. Everyone knows it better … Someone needed for safety? Who do you trust? And how dangerous is the trick really?

Injuries, on the other hand, are actually rare. And if something happens, then it is more likely that necessary agreements were not made, or misunderstandings happened. Mostly, the partner’s mistake can be compensated. Only the unsuspecting spectator is on the verge of a heart attack.

The creativity of the acrobats is often unbelievable and names already reused multiple times. As a good basis for common communication, the reduction to common terms has proven itself, even if these terms sound little sexy … Each acrobat can differ “lying”, “standing” and “head over” from each other. Everyone knows “Base” and “Flyer” as well. However, concepts such as “high” are far from equal. Some see it as a standing base, others expect straight arms to do so …

Below are a few definitions that I refer to in the individual posts again and again. Basically, I try to use as few technical terms as possible and if necessary, the established definitions from gymnastics.

Is the ability to hold a flyer in the air against the resulting shear forces. Ideally, only a little force and minor corrections are required.

Maybe one or the other is smiling now ... but you should keep in mind that you can hold your own weight on one arm with a little practice. So why not double the weight on both arms? Lack of power is certainly not the problem ... try to raise a half full barrel, you will not fail because of weight!

With contact point is the connection between base and flyer meant to balance this. A one-armed balance is not only one-armed, but also has only one contact point.

This refers to the stable snapshot of a trick, without reference to the way in or out.

A trick is not just a position in which a flyer is balanced. It starts from the moment the flyer leaves the ground and the base takes over the balance, and ends when the flyer is back on its own feet.

To determine the necessary level are crucial:
Sometimes the entrance is more difficult than the desired position itself, because the trick uses dynamic or powerful constructions of heavier positions.

The force line is a ballistic view of the center of gravity of a flyer towards the contactpoint of its base. This means in particular the mutual influence of the two force vectors of base and flyer. The goal of the base is to reduce the fall of the flyer to 0 when landing without jerking.

The line of force is similar to the legs of a chair. The more legs, the less power is necessary in the balance of this contactpoint, since the shear forces produces less effect. With the 3-legged chair you can lift your own legs from the floor much more carelessly than with the 1-legged chair ...

Leaning means that the flyer shifts its center of gravity in one direction outside the line of force. This only happens in a controlled manner if no impulse arises. For this, the flyer must learn to create a deliberate shortening in the middle of the body, which makes it lean in the desired direction. As soon as his center of gravity accelerates in the direction of the fall, he begins to tip over. It's up to the base to control that acceleration by slowing it down or, depending on the trick, boosting it.

A tilting through the base is already caused by a minimal change in the connect point outside the power line. If the base deliberately initiated tipping, the flyer should not correct, otherwise it will produce undesirable shear forces. In case of doubt stop action!

Rotations are initiated by tilting the flyer in the form of maximum torque (e.g. stretch).

The subsequent rotation is caused by a pulse of the base along the line of force behind the center of gravity of the flyer. In addition, the flyer changes its shape toward minimum torque (e.g. packets) to speed up the rotation. These changes must always be in the direction of rotation.
A common mistake in forward somersault is that the flyer actively draws the thighs towards, thus creating an impulse for backward somersault.

The rotation is terminated by the flyer resuming the form of maximum torque (e.g. stretch again). Basics fo Physics: only rotations with the smallest or the greatest torque of a body are stable against lurching ... (here a trial in weightlessness → Dschanibekow-Effekt))

And here is a detailed explanation for non-physicists based on Vertasium.com.

During the high relieving, the base can use its power against the occurring shear forces, because the flyer is nearly weightless at this moment. Thus, the base may e.g. correcting the contact point.

The shear force is a force vector that is introduced crosswise to the line of force, the force that makes a slackline wobbling.

Unfortunately, the shear force can not be avoided! However, if it does start jerkily, it's mostly caused by an instinctively made correction of the flyer.
A stick is very easy to balance, as the fall direction can be corrected quickly. If a flyer is correcting, it will be unpredictable for the base! Therefore at best, the base looks like he's balancing a rattle...

As a base, it is very practical to imagine a big ball that he want to balance, but also deliberately tilt and rotate. He will consciously bring in shear forces without changing the connecting surface (no tilting!). 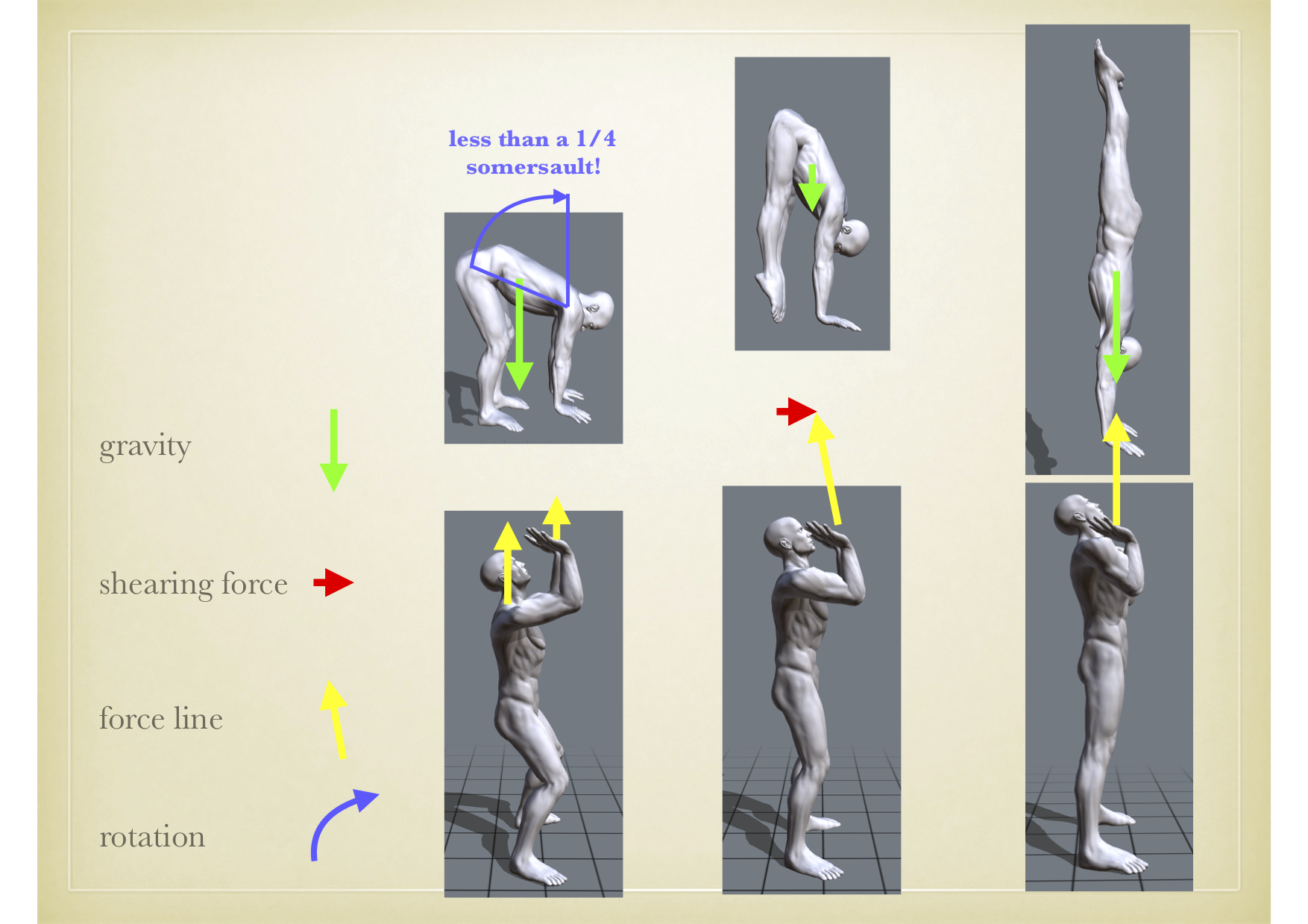 Just to clarify my previous definitions: this picture shows 1 trick, which has 4 connect points (standing on the shoulder with hands supported) and ends with 2 connect points (handstand in the hands of the base). Furthermore, 2 positions each (beginning and end of the trick) of Flyer and Base are shown, which are stable. The middle 2 pictures are only to illustrate the shear force during the high relieving, as these snapshots are not stable!